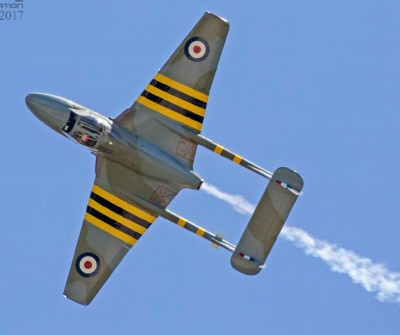 Our New aircraft is a DH-115 Vampire. Vampy "Too" is a great flying ship and a needed addition to Vampire Airshows. 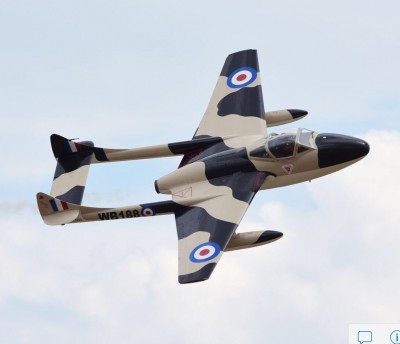 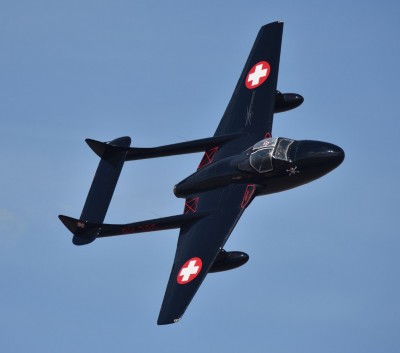 History: With World War II entering its middle phase, there was a need for a new fighter, agile, fast, and lethal . The deHavilland DH 100 Vampire FB-6 fighter was the solution. It was first flown on September 2, 1943, and entered service three years later in 1946 and known as the Vampire FB.Mk.1.

Designed to take advantage of the new deHavilland Goblin turbojet engine, the DH 100 was faster and more maneuverable than its piston contemporaries, the Spitfire and a Hurricane. While Vampire looked very unique, the design was a function of the engine size.

By the time production finally ended, 3,269 Vampires had been built in England and a further 1,067 built under licence abroad. The Vampre remained as a front-line fighter for the RAF until 1953, after which it was retained only in the pilot training and refresher role. Elsewhere, the aircraft had surprisingly longevity with large numbers still in service in several air forces in the 1980s. The Swiss Air Force was the last Vampire user, retiring their sizeable fleet of DH Vampire FB.6s and T.55s from active service as late as 1990.

The DH100 Vampire finally retired from RAF service in 1966, being replaced by the Hawker Hunter and Gloster Javelin.

There are large numbers of airworthy aircraft still flying today, predominantly due to its simple design and relatively easy maintenance. 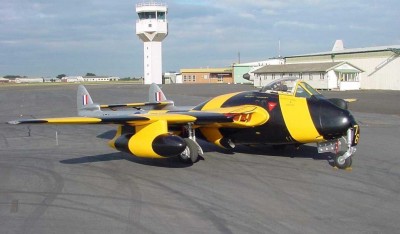