No. 54 Squadron RAF became the first jet aircraft to fly across the Atlantic Ocean.

Fighter Command's 247 Squadron was given the honour of leading the flypast over London at the Victory Day Celebrations. The Vampire was a versatile aircraft, setting many aviation firsts and records, being the first RAF fighter with a top speed in excess of 500 mph (800 km/h). On 3 December 1945, a Sea Vampire piloted by Captain Eric "Winkle" Brown became the first pure-jet aircraft to land on and take off from an aircraft carrier.

Vampires were used in trials from 1947 to 1955 to develop undercarriage-less fighters that could operate from flexible rubber decks on aircraft carriers, which would allow the weight and complication of an undercarriage to be eliminated. Despite demonstrating that the technique was practicable, with many landings being made with undercarriage retracted on flexible decks both at  RAE Farnborough and on board the carrier HMS Warrior, the proposal was not taken further On 23 March 1948, John Cunningham, flying a modified Mk I with extended wing tips and powered by a de Havilland Ghost engine, set a new world altitude record of 59,446 ft (18,119 m).

On 14 July 1948, six Vampire F.3s of No. 54 Squadron RAF became the first jet aircraft to fly across the Atlantic Ocean when they arrived in Goose Bay, Labrador. They went via Stornoway in the Outer Hebrides of Scotland, Keflavik in Iceland and Bluie West 1, Greenland. From Goose Bay airfield they went on to Montreal (c. 3,000 mi/4,830 km) to start the RAF's annual goodwill tour of Canada and the US, where they gave formation aerobatic displays. At the same time USAF Colonel David C. Schilling led a group of F-80 Shooting Stars flying to Fürstenfeldbruck Air Base in Germany to relieve a unit based there. There were conflicting reports later regarding competition between the RAF and USAF to be the first to fly the Atlantic. One report said the USAF squadron delayed completion of its movement to allow the Vampires to be "the first jets across the Atlantic". Another said that the Vampire pilots celebrated "winning the race against the rival F-80s." 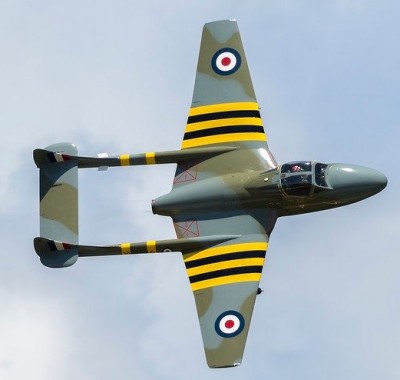